The first Thursday without The Vampire Diaries and I was such a dork it kinda felt like a boyfriend dumped me – and now I had nothing to do on date night!!

Luckily this news cheered me right up – Josh Jackson otherwise known as Pacey – the Ultimate TVBoyfriend, was asked if he’d ever appear on TVD – being as it is created by Kevin Williamson, his former Dawson’s Creek boss – and he said sure!

This got me to thinking that the episode should just be a TVBoyfriend Olympics. Events would include:

I would add Face Cupping (which my friend Trish and I think may be the very thing that MAKES a TVBoyfriend) – but I’m pretty sure Pacey would have the advantage here because Damon’s face cuppage usually happens right before he snaps a neck – not so dreamy!

Trish and I and fellow blogger Julie will be the expert panel who will judge this epic event – with Stefan Salvatore bringing us refreshing beverages – in a tank top, of course.

Paul Wesley is Good Vampire Brother Stefan on my beloved Vampire Diaries. Having been through the love triangle trenches with show creator Kevin Williamson before, I was poised to totally dislike this character and spend my viewing time snarking about how annoying he was and how bad his hair looked.

But lo and behold! Stefan Salvatore is no Dawson Leery! He’s a leg in a love triangle I can actually appreciate! He’s also a pretty good actor. Yes, pretty boys on vampire shows can act. His admission to Elena in Blood Brothers of his 100+ years of guilt and pain put Edward Cullen’s brooding to shame.

So last week I found this video on YT of Paul and co-stars Nina Dobrev and Ian Somerhalder doing a TVGuide shoot last year. Good GOD did Paul bring the pretty! I mean, I know he’s easy on the eyes but I had to pause the thing so I could screencap this:

And today this popped up in my Twitter feed:

I love me a versatile guy who can look like a clean-smelling pretty boy, and a grungy bad boy. Well played Paul!

How many days until the S2 premiere again? 😛

More of my more recent musings on Paul here

The S1 finale of The Vampire Diaries is this week and I am equal parts excited/horrified – because I can’t contemplate a summer sans shirtless/tank topped brooding/pining Salvatore Brothers, but I can’t wait to see how they wrap up this satisfying season.

As I’ve been fangirling ever since the very first promo clip, I knew I would love this show, I just had no idea how much. For one thing while it falls under my Cheesy Teen Drama category (ingredients: twenty-somethings playing high school students, teen angst, Kevin Williamson), it is actually better than a CTD. It is amazingly well-written and complex and dark and fun. It is the step between the sugary-sweet-abstinence-and-marriage-Twilight series and the lets-get-naked-and-get-down-and-dirty of True Blood. There’s sweet and sex in TVD and it is, to borrow their own term – compelling as hell.

And yes, the Salvatore Brothers are pretty and hot and wear tank tops and no shirts very well – but you know what? They’re good actors. Paul Wesley really cranked out a performance the past few weeks as “Off the Wagon Blood-a-holic” Good Brother Stefan that was quite impressive. I went as far as to say he’s a future Johnny Depp: a pretty boy on a teen show that will actually make a successful leap one day to a bigger career.

The total revelation has been Ian Somerhalder who has taken what could be a one dimensional character of bad-boy-vampire-sexy-mischief-maker and really made him complex, funny, scary, intense, entertaining – and now he’s entering my all time Favorite Phase Ever: Pining Boy (Pacey Witter anyone? Jim Halpert? Doug Ross? Those are my Hall of Famer Pining Boys and Damon Salvatore is primed to get right up there with them.)

All season Damon had showed us how little he cares about human life, emotions, connections to people. But that’s not true. He has tremendous love for his brother. He got his heart broken – 100+ years later – by a not-dead-vampire-girlfriend who he has longed for only to find out she doesn’t give a damn about him. He’s made a friend – or two actually with Wannabe Vampire Slayer Alaric and most importantly – with Elena. She of the looks-like-not-dead-vampire-girlfriend and oh right – dating-his-brother-he-pretends-to-hate-on-but-doesn’t really.

So the cat is out of the bag that Damon lurrrves Elena and she’s taking it pretty well, her boyfriend is taking it pretty well (as in a very emphatic speech to his brother that “history is not going to repeat itself” – did I mention during the Civil War the Salvatores were both dating the same not-dead-vampire-girlfriend who looks JUST like Elena?) And Damon seems, from the clips for the finale – to be trying to work his sexy, flirty charm to not much avail. Something I’m not sure he’s quite encountered ever before (because, well, LOOK at him! And of course he can compel people to do whatever he wants!)

I don’t know what else happens in this episode with these two – but this is the moment – this is where his expressions lay everything bare about his feelings for her – and I cannot stop squeeing over it like the 14 YO girl I am. My friend Trish put it best: “you know what stood out to me the most? Vulnerability. She got to him and she can wound him and he knows it.”

Thanks to the fab Julie of TV Recappers Anonymous for bringing this exciting clip to my attention. Stay tuned as she and I work out some sort of joint/live/something blog for the finale on Thursday. Details TBD but we gotta send the Salvatore Brothers out in STYLE!

The DVR was working overtime tonight. I watched The Office and Community live with my mom and have Fringe and Parks and Recreation to watch. I got home in time to watch Vampire Diaries which I am ridiculously in love with already just like I knew I would be.

TO seems to be back to form. It had a season or so there (particularly last year) where I felt like it was what I did to pass time until 30 Rock. Andy was particularly awesome tonight and I love anything out of Creed’s creepy mouth. Community looks promising and my love for Joel McHale will supersede my utter disinterest in Chevy Chase or anything Chevy Chase related (sidebar: CC, like Adam Sandler – is one of those things that boys seem to get that girls don’t. I know one woman who admits to AS love and have never met a woman who worships at the altar of “Fletch”)

Am I the only one who likes Parks and Recreation? It had a slow start but has some hilarious characters. In particular her boss with the 80’s mustache who completely won me over last season with his soliloquy on his love of shrimp wrapped in bacon and Somalian pirates. And Chris Pratt as Rashida Jones BF who had us rolling on the floor last year. He stole the show from Amy Poehler IMO.

I am very excited to see Fringe which I hear got its act together. Plus if you haven’t heard – I love me some Josh Jackson (I KNOW! right??) And his wardrobe.

I predicted I would love Vampire Diaries based on my love for all this vampire crap + Cheesy Teen Dramas from Kevin Williamson. 15 minutes into the pilot I texted my co-CTD addict friend to proclaim my devotion. It is no True Blood, of course  but it is fun and wicked and cheesy and so far I haven’t had to call one “the Dawson Vampire” yet so that is a good thing. 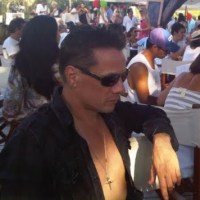